Landscape sketching is a great way to begin working directly from the landscape. It will help you to understand general principle about landscapes before attempting to work in paint (which can be a bit daunting!).

This lesson will help you to select a part of the landscape to focus on, compose the scene and begin blocking in the major masses and establish value relationships. It is important that you remember the two principles explained  in last week’s lesson – the Theory of Angles and Aerial Perspective – while establishing your drawing.

When working outdoors from life, the first thing you need to do is decide which parts of the landscape you want to include in your drawing. For many students starting out, this is much harder than it sounds.

When you are working from a photo or 2D reference it’s easy to crop the image down as it’s just a case of drawing a rectangle around the part of scene you want to focus on. In theory, when working from life you just do the same thing, except you are cropping a part of a 3D scene full of infinite depth so it can be tricky.

To begin with I recommend selecting the horizontal boundaries of you drawing from the scene in front of you. It’s best to pick obvious landmarks that will remain static; a lone tree, a building or a fence line etc.

After you have established the horizontal boundaries you can the same for the vertical boundaries, this can be a bit trickier as the sky will not have any static landmarks, however you should be able to find a part of the foreground at the bottom image which will serve as the lower boundary.

Once all of these limits have been chosen, you will have a rectangle that contains all the parts of your subject. I’ll demonstrate the process a couple of times using a complex panoramic photo below:

The scene has many elements so you may find it more manageable and easier to compose by isolating a section of it.

Begin by choosing your left-hand boundary – in this case it’s the edge of the rocks on the shore that are just catching the light.

Now choose a right-hand boundary – this time it’s the edge of the near shore in light.

After deciding the horizontal boundaries, decide where you want the bottom of your sketch to be. In this case I’ve chosen the bottom of the rocks.

Finally choose the top of your image, I’ve used the top of the tree line (which is slightly out of frame).

I’m going to repeat the process with another frame on a different part of the image; Left-hand side, the dip between the hills in the distance.

Right-hand side; the edge of the reeds.

Bottom; the large rock resting on the sand.

Top; level with the top of the highest point in the distant hills.

Hopefully that is clear – now that you’ve decided how to frame the scene, you sketch a rectangle on your page that matches the proportions. In the examples above, the height of the first rectangle is just about half the width, whereas the second shape is pretty much square.

Alternatively, if you don’t want to draw a complete rectangle, you can sketch an aspect at each edge of the scene. This will also establish the boundaries without looking too contrived. If you’re doing a drawing that takes up your whole page, you will need to frame your scene to match the dimensions of your page (the opposite of what we’ve just done).

Once you’ve decided how to frame your scene, you can begin composing. Landscapes are much more forgiving than other subjects in terms of moving features around. You can’t move a nose to edge of the face for the sake of a composition (unless you’re Picasso) but you can happily shift the position of a tree or rock (within reason, trees floating in the sky may be somewhat unrealistic).

You may find that your scene has more features on one side than the other. So it could help to move one of these features across to balance the composition.

A good principle to follow when you’re first beginning to compose pictures is to seek asymmetrical balance. This means that, while you shouldn’t just make everything on one side the same as the other, a picture should feel like there is an equal amount of interest on both side of the image.

A useful concept taught by many traditional instructors is based on the idea of a steelyard – a steel yard looks like this: 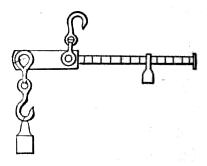 It is made from a bar hanging from a fulcrum, a heavy weight on one side and sliding scale with a lighter weight on the other side. In order to balance the scale, it is necessary to slide the smaller weight further from the fulcrum (or centre). Somewhat surprisingly, this concept, when applied to drawings and paintings, is very useful when developing balanced and dynamic compositions.

The images below come from a book called ‘Pictorial Composition’ written by American artist and instructor – Henry Rankin Poore – in 1903. The full text is available to download free in PDF format here. 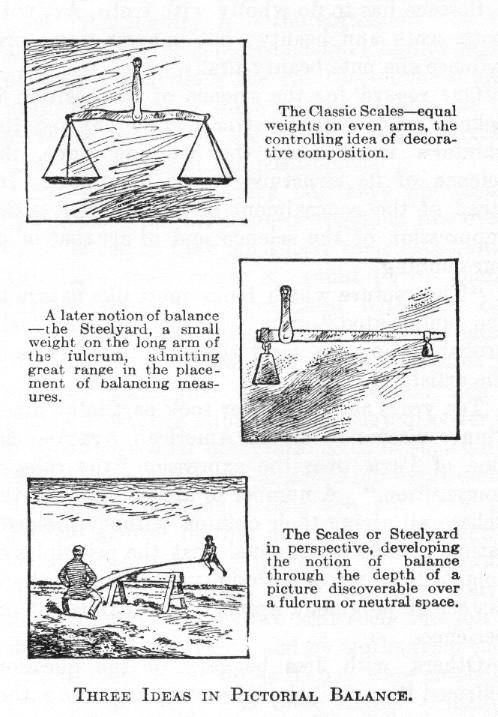 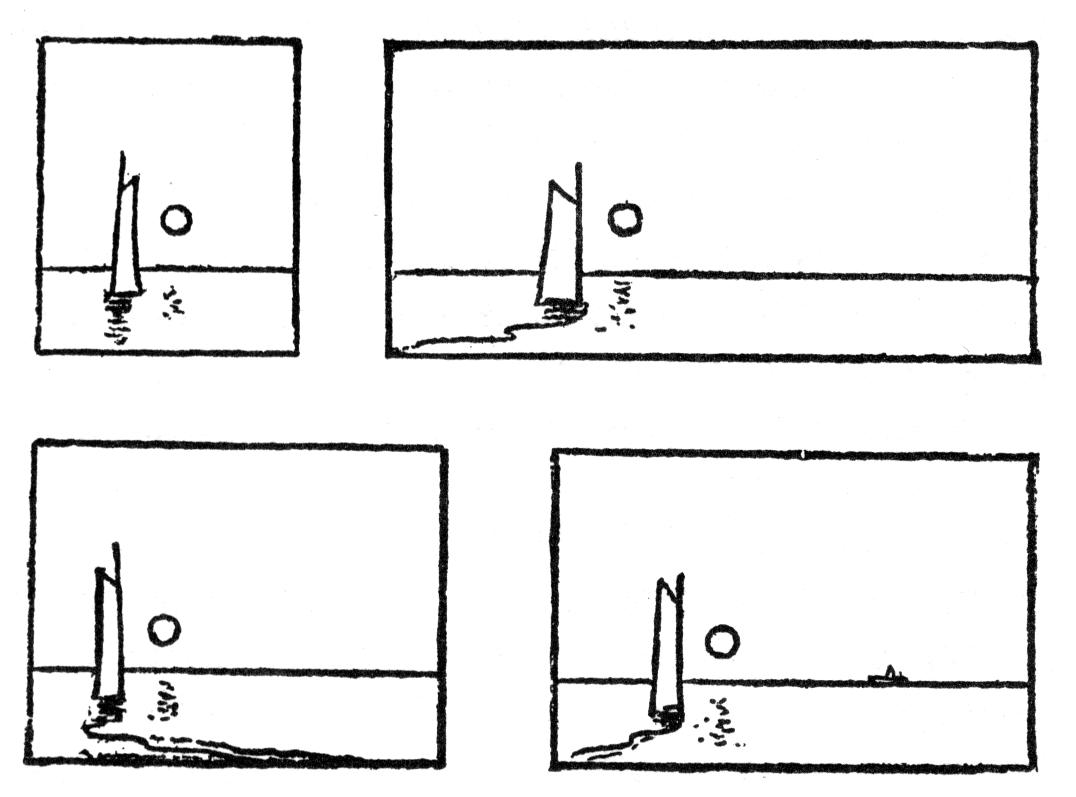 You can see that the steelyard concept has been applied in the sequence of compositions above. The two images on the left and the image at the top right feel as though they are tilting to the left because all the interest in the image is found at that side. Whereas the image at the bottom right includes a small dark ship on the right-hand horizon which acts to balance the larger mass on the left.

As a general rule a small high-contrast subject in a empty space will command as much interest as a larger more complicated mass, this is because our eye is drawn to contrast and aberration.

It is also possible to find similar balance vertically across the image but this is not as important as the right left balance because we tend to read images horizontally.

Now that you have decided how to crop your scene, you can begin placing the major landmarks, by taking some quick measurements. You needn’t measure everything in the scene, but it’s worthwhile figuring out where some of the major features lie before going into more detail. If you have watched or read some of my guides on measuring, this approach should be fairly familiar to you.

Given that your drawing is likely a different size compared to the part of the scene that you’re drawing, you are going to need to use comparative measurement. This approach requires you to figure out where points in the scene lie as a proportion of the whole width or height. Then you can then use the same ratio/proportions when marking your drawing.

I recommend watching the video for this part of lesson, as it will be much clearer than me trying to explain in writing.